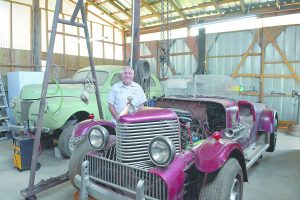 Rodney Boggan stands behind a 40 model Ford he is restoring. (Bruce Branum | The Standard) 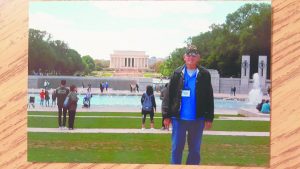 Rodney Boggan in Washington,D.C. during his and fellow veterans Honor Flight. (pic provided)

“Just before 10 p.m. they decided to overrun us and they did and killed everybody. I don’t know how many died,” said Rodney Boggan of his experience in Vietnam when he received the wounds that would finally bring him home.

Boggan recently took an Honor Flight to Washington, D.C. on May 3. Honor flights are conducted by non-profit organizations dedicated to transporting United States military veterans to see the memorials in our nation’s capitol.

It was a whirlwind tour lasting just over 24 hours. Boggan said, “We left at 2 a.m. Wednesday morning and got back at 2:30 a.m. Thursday morning. It was a fun little trip but I didn’t have an idea how small D.C. was.” Boggan and his group of fellow veterans visited several memorials and got to meet with Congresswoman Martha Roby and her staff to discuss veterans’ issues over their main supper.

He was especially impressed with the Iwo Jima Memorial. He stated that depending on where you stood the flag seemed to be rising higher and higher.

Boggan grew up in the Brushey Creek community and went to Brushey Creek Elementary through the sixth grade. Then he went to Georgiana High School. At the age of 18 years and 3 months old Boggan got drafted to serve in Vietnam as part of the 199th Light Infantry Recon Division in the U.S. Army in August of 1968.

He had two months of basic training at Fort Benning in Georgia before being transferred to Fort Ord in California where he received Active Individual Training. “From there you knew you were going to Vietnam, depending on how well you performed and how smart you were,” said Boggan.

From California, he was sent to Saigon for two weeks to acclimate to the weather. “It was 120 degrees in the shade,” Boggan continued. After that he was flew by helicopter to a line company where he started performing search and destroy or search and seize missions in the jungles north of Saigon.

“You stayed wet all the time. You couldn’t wear underwear or t-shirts. You cut your sleeves out and wore no socks, just jungle boots, fatigue pant and shirt and jungle hat. Everything chaffed and jungle rot was prevalent,” he added.

Boggan went on to recount several of his missions during his 5 month and 3-day service in Vietnam, including the last where he was injured severely.

“A group of 15-25 soldiers would go into the jungle and pull ambushes for 48 hours then we would return to a line company for 12-24 hours of rest. They choppered us in and we were choppered out. A lot of times the helicopters couldn’t land because they would set off booby traps in the marshes and we literally had to jump out of the helicopter.

“If they told you to saddle up, it meant that it was time to go. No shaving. No bathroom. We carried no food, except for maybe a candy bar and no water. You got that wherever you could. We did tote four grenades, twenty 18 round clips of ammunition for our rifle, six flares and a personal weapon. We also carried 200 rounds of ammunition for our main gunner.

“We went into places we shouldn’t have. If we got behind a bunch of Viet Cong (VC) that crossed a river into another country, we went after them. They (the U.S. Army) insisted on a body count or a weapons cache to make the rear look good.

“I was injured three times during my tour of duty. The first time I was shot in the leg. It was a clean wound. They wrapped it up and put me back out. The second time, a piece of shrapnel from a claymore mine hit my head when I peeped my head up to see what was going on.

On that fateful night Boggan was hit in the hip by a bullet and chest by the shrapnel of the mortar. Earlier that day, he and his fellow soldiers had captured three VC soldiers on a river bank and after having the prisoners flew out by helicopter, they then walked unkowginly into a VC bunker complex, which was in the shape of a horseshoe. Any which way they turned they received fire.

Boggan continued, “We were basically pinned down and as night approached you could smell the drugs they were smoking and they were going crazy. Just before 10 p.m. they decided to overrun us and they did and killed almost everybody. I don’t know how many died.

“There were 15 men in the unit and the only thing we could do was back up into a defensive position like a covey of quail and shoot at anything that moved.

“I remember there was so much fighting going on they couldn’t come in when they called for a medivac chopper. We had one friend in that unit, I don’t know his name, but he defied orders and came in with no lights on. He had so many people on that chopper that he couldn’t take off and had to kick some off. I was one of the last to make it on.

“When we took off I grabbed the 60 cal at the gunner’s door and just started firing. I knew of only one other man that made it.

“I don’t regret going or doing what I needed to do but it was a rich man’s war. ”

Boggan received three Purple Hearts and a Bronze Star for his service and was an acting Sergeant.

Boggan now has only half of his right lung, has had his hip worked on and still carries pieces of shrapnel near his heart as big as the end of your thumb. Over the years, pieces of shrapnel have worked their way through his skin.

From Vietnam, Boggan was shipped to the 249th hospital unit in Tokyo, Japan, then to Fort Gordon in Georgia. After spending almost two months in the hospital, he was sent back to Fort Benning. There, they put him on light duty and he began driving a truck, and that later became his career after being discharged from the Army in 1971.

He drove for himself until the economy got bad in the early 70’s and has driven for other companies since. He retired at 65 and still drives a truck part-time, but his main hobby is rebuilding old cars.