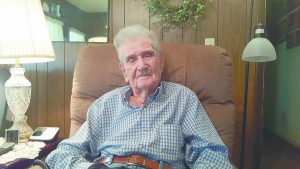 “It has been a good life with this man,” said Eleanor Stabler of her husband R.B. Stabler who will turn 100 years old on June 12. The couple will have been married for 31 years on the last day of May. Eleanor added, “I want everyone to know his story.”

I got to sit down with them both on Friday, May 19 for an afternoon chat and was impressed by R.B.’s memory of his child hood, service in World War II, his life in general and his humble regard when he said, “I was blessed by the good Lord to have had two good wives.

Born in 1917 and reared in the Wildfork (Greenmore) Community of Butler County, R.B. grew up through the Great Depression but he said, “They called it a depression, but we didn’t have anything so we didn’t know any better. We got along pretty good considering.”

He grew up working on a six mule row crop farm with his dad who sharecropped with his father-in-law. They raised mostly cotton. “It was the money crop,” said R.B. “there was a lot of hard work.”

He then started as an auto mechanic in the mid 1930’s before he went into the U.S. Army in July of 1942 joining the 3rd Infantry Division. From that point he was sent to the Philippines where he saw combat in the Battle of Luzon. After the battle they started Advanced Infantry Training in preparation for the invasion of Japan when the Japanese surrendered. R.B. said, “The instructors told us just because you’ve been in combat, don’t think you know it all. They said to expect 85 percent casualties so you better get as much training out of this as you can.” He added with wry smile, “That was encouraging to hear.”

R.B. was then stationed on Japan at Himeji, which is about 90 miles from Kobe. After completing his service in January 1946, at the rank of Buck Sergeant, he came home and returned to being an auto-mechanic for Golson Motor in Fort Deposit.

In 1954, he went to work as a mechanic at Maxwell Air Force Base in Montgomery where he stayed nearly 23 years until retiring at age 60. R.B. stated that he worked on everything that moved on the ground at Maxwell.

He then went to work part-time for Bobby Terrell and Terrell Enterprises of Greenville for 15 years before finally retiring at the age of 75 in 1992.

R.B. has visited all 50 states and driven to all 49 continental states, including Alaska.  He said, “Hawaii was my favorite state to visit.” In addition to all 50 states, R.B. has traveled to five European countries, including England, France, Germany, Switzerland and Holland on a 14-day trip.

R.B.’s first wife, Mary Frances Gordon died when she was 65. They were married 43 years. In June of 1984 he married Eleanor Davis. R.B. had two sons by his first wife and Eleanor had two daughters and two sons. By coincidence, Eleanor and R.B.’s first spouses died in the same year.

Both Eleanor and R.B. are proud patriots and stated, “We want to thank all those who served and made the country what it is.”