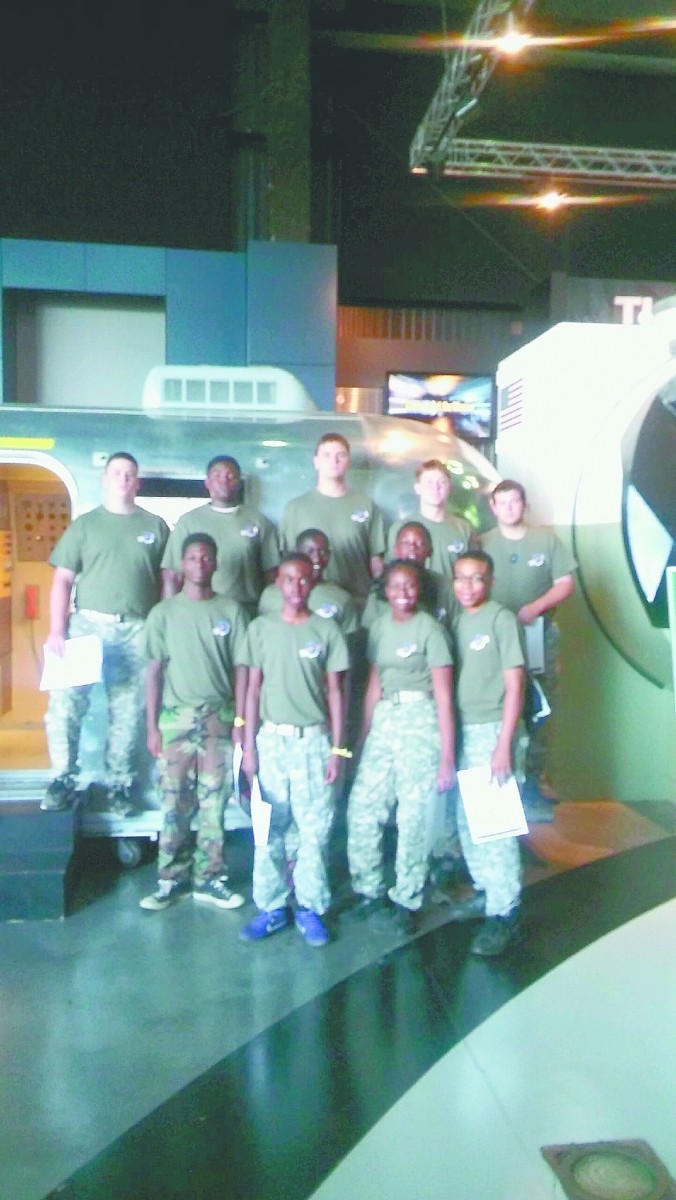 Eleven Greenville High School (GHS) JROTC cadets recently attended the Aviation Challenge hosted at the U.S. Space and Rocket Center in Huntsville last week. They arrived back in Greenville on Saturday, June 10, a little tired but in good spirits.

It was the first time that GHS JROTC had participated in the camp. Eleven first year cadets went to the traditional Army Joint Cadet Leadership Course camp at Fort McClellan a week prior but the Aviation Challenge camp provided the perfect opportunity for older cadets who had already attended JCLC or were ready for the more technology-heavy Aviation Challenge.

Colonel Hester stated, “The resources and facilities at the Space Center were truly incredible. Cadets trained on flight simulators and the centrifuge machine as well as on patrolling and survival techniques.  Later in the week, the cadets met astronauts, planned more complex air missions on flight simulators, and participated in a Field Training Exercise.”

When you combine all of this with physical training at 5:30 a.m. and daily and marching competitions, it will lead to a tired bunch of young people by the end of the week,” he added.

“Tuition to Aviation Challenge is not cheap. We were very fortunate that the Rotary Club is such a tremendous supporter of JROTC and recently made a generous donation that has allowed our 11 campers to participate in this incredible camp.” Costs for some individuals who attend camps at the flight center can reach $900.

For our young people to experience the Space and Rocket Center, to apply math, science, and technology skills in such a rewarding way, and to meet astronauts and engineers will certainly broaden their perspectives and could even change their lives,” said Colonel Hester.

One of the highlights for the cadets was to listen and speak with astronaut Wendy Lawrence. She has logged over 2000 hours in space and flown four shuttle missions.

Colonel Hester added, “Tony McConnico, Jonathan Wills and Ross Hester served as our flight commanders and Anthony Adams and Payton Thomas were part of the Honor Flight, who placed first out of 10. Laun Pryor won an award for outstanding PT.

Colonel Hester is a native of Mobile but has deep roots in McKenzie. He graduated from Baker High School with four years of JROTC experience before going to the U.S. Military Academy at West Point.

He was recommended by Senator Jeremiah Denton and spent 27 years in the U.S. Army. He also served in Desert Storm in 1990-1991 with the 24th Infantry Division. He finished his career serving as a Foreign Area Officer attaché.

He retired two years ago and began looking in the Alabama region when the position at GHS became available.

The JRTOC program is also part of STEM (science, technology, engineering and mathematics), which is an interdisciplinary and applied approach.