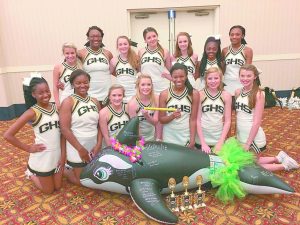 Anna Findley, Head Coach of the Greenville High School cheerleaders, is certainly proud of her girls and their performance at a recent cheer camp held in Panama City, Fla.

“We won a gold ‘superior’ ribbon for all three evaluations we had, which included a sideline, cheer and dance. A gold ribbon is the highest ribbon award to receive.”

We ranked top five in the cheer and band dance competitions and 3rd place in the Extreme Camp Routine. We also won the “Whale of the Day” which is another school spirit award given to the squad with the most spirit.”

We had six girls nominated for All-American and two girls were chosen”, stated Findley.

The two girls that were chosen were: Alyssa Lear and Caitlyn Tilley.

Findley added, “We also had four senior girls invited to try out for the Universal Cheerleaders Association (UCA) Staff next year. These girls showed their best leadership and teamwork skills through-out cheer camp this year.”

The UCA Staff hand selected these cheerleaders because of their positive attitudes and role model-like qualities as a Greenville High School Cheerleader. This is a prestigious honor and I hope they all take pride in their accomplishments.”

It was a positive event and the girls learned so much while attending. They were 20-25 cheer squads in attendance and I enjoyed seeing the girls teamwork and bonding with the other squads,” stated Findley.