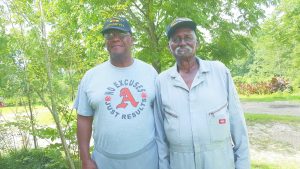 Bob Bennett turned 90 on Wednesday, June 28. He is pictured with his son-in-law, Lieutenant Colonel James L. Walker. Both Bennet and Walker are veterans. Bennnett served in the Philippines and later in Japan after World War II. LTC Walker served in Vietnam from 1968-1969 in the Cho Lon quarter of Ho Chi Minh City (formerly Saigon). LTC Walker now teaches JRTOC in Decatur, Ala. (Bruce Branum | The Standard)

Longevity of life can be credited to many things but for Greenville’s Robert Samuel Bennett, he credits staying active, visiting the doctor regularly, eating healthy, and keeping his faith in God. Robert, known by most as Bob, will turn 90 years of age on June 28, 2017. He is the second youngest of 14 children born to William Madison Bennett and Sammie Williams Bennett. He was born in Butler County and spent all of his years living in the Mount Zion Community. Bob attended school at Lomax and Hannon where he graduated with his high school diploma and was valedictorian of his class. He was drafted into the United States Army and upon completing his time, he returned home to start his life as a farmer. He joined in with his brothers, Fred, Lambert and Paul to establish the Bennett Brothers Co-op. The brothers farmed many acres of peanuts, vegetables, fruits, cane, pigs, chickens, cows, and maintained several fishing ponds where they raised a variety of fish including brim, bass, and catfish.

In 1973, Bob gained employment with the postal service as a substitute carrier. In the late fall of 1980, Bob was given a full-time, 112-mile route, servicing the Greenville and Forest Home areas. He was the first African American rural route carrier. Bob delivered mail to welcoming families and businesses for nearly 29 years. Retiring allowed him to spend more time with his wife of 68 years, Ceola Smith Bennett, his 6 children, 10 grandchildren and 14 great grandchildren.

Bob spent the last 9 decades of his life hard-pressed on surviving and providing a good life for his family. Aside from committing his life to his family, job, and farming, he spent many of those days helping organize and start the Butler Activity Training Center, where his daughter Christene continues to attend for more than 45 years. He also helped establish and start the Mount Zion Boy Scout Troop 180, which he served as the Boy Scout Master and received the Silver Beaver Award.  Bob also found himself serving mankind though his dedication as a volunteer firefighter for the Central and Mount Zion Communities, a PTA president, secretary for the Star of Zion Lodge #495 and Sunday School Superintendent for the Mount Zion Missionary Baptist Church for many years.

Although father time is trying to get the best of Bob Bennett these days, he does not allow him to stop him from completing his daily  “hunny-to-do-list” his wife allocates for him, feeding the fish in his pond, feeding his cattle, bailing hay, attending church regularly, climbing up on his tractors and tending to his crops. Bob stated, “Doing all these things is what keeps me going from day to day.  I am trying to keep up with this new way of living, in the technological world.  50 years ago, I never would have thought I would have a phone that I could take with me everywhere I go. I have been to a lot of places and seen a lot of things, good and bad. I thank God for allowing me to see 90 years of age and I hope to see many more years to come. I am alive and living until God calls me home and I wouldn’t want it any other way!”