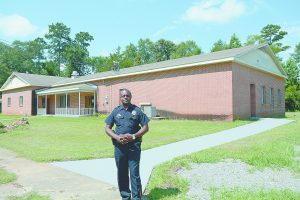 When Georgian Police Chief Carlton Cook first arrived in Georgiana he had a vision. It was to find a location for the police department and to start a safe haven and community center, complete with trade education, youth activities and tutoring, and a safe walking area for the citizens of Georgiana.

After looking around, he identified one of the buildings at that the old Georgiana High School, which could serve as the new police department and then possibly he could work to revitalize the other buildings and grounds to serve as a community center and safe haven.

He approached the owner, Morris Middleton of Orlando, Fla. who was a former resident of Georgiana with his vision. After Middleton made a visit to Georgiana and listened to Chief Cook’s vision, he offered the building for only $1 a year.

Middleton owns the buildings south of the gymnasium, which was sold to him at a bid auction by the Butler County Board of Education.

Chief Cook stated about Morris, “I shared with him my vision for police department and the City of Georgiana, which was to create a safe haven for the citizens and start development towards a place for trade training, which includes welding, truck driving and a mini unemployment office where people would have access to jobs here in Georgina versus having to go all the way to Greenville.

“I also wanted to develop a Youth Activity Center (YAC). I hope to partner with the Butler County Board of Education and start summer programs for the kids.

“That way, they will have somewhere to go during the summer and also when school is in session, they can have a place to receive tutoring from retired educators and tradesmen who want to continue to give back to the community.

“I also want to utilize the football field, the baseball field and the gymnasium and maybe establish a volleyball court.

“I shared that vision with him (Morris). He took it and said I will donate this building to the police department for $1 a year.”

Chief Cook went to work cleaning out the building and stripping the old carpet. In doing that, Chief Cook had a couple of citizens around Georgiana that had warrants they couldn’t afford to pay. They wanted to clean up their records and get a clean start.

According to Chief Cook, “One of the guys had construction skills and he had warrants with the county, but through working with the court system we turned it into community service. It helped him and helped the city. It also helped his girlfriend in the same way to clean her record by her providing painting services.”

Chief Cook also had two other citizens who came in with old tickets they couldn’t pay who worked two hours a day towards paying their outstanding tickets. By sharing his vision with community, Chief Cook said the City of Georgiana has received several monetary donations for helping to achieve his vision.

“Building relationships is the key,” said Cook. “It takes a negative and makes a positive, like in the case of the guy and his girlfriend. Initially, they were scared of the police but this has changed their whole outlook and for the community it has helped because they are telling other people how we can help them as well and it is working.