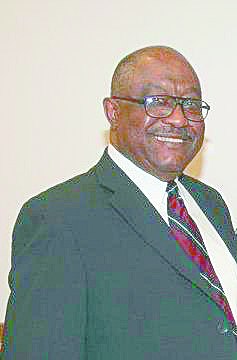 My good friend Jeddo Bell passed away on Wednesday,July 5. A great cook, a great manand father, he was civic minded and a good friend to many, both here and abroad.He was well known for hiscooking skills, especially his pound cakes. If you ever had the pleasure of having a slice you would know the love Bell put into baking them. From the right temperature of ingredients to the mixing of the batter, his caring to make it the best he could showed evident as with all his other efforts in life. In my talks with Jeddo over the years, from the meeting rooms to the streets, he always had a smile and cheering disposition. Even the battle he fought against his cancer did not deter his gracious personality.Tommy Monk, who worked as a teacher across the hall from Bell at Georgiana School, said,“We were very close friends. I knew his family and his son Tracey. He was one of the greatest guys I have ever known in my life. Everybody who knew Jeddo knows that. He was the best cook I ever knew. “Everybody knows about his pound-cakes but he also made hushpuppies that were fantastic.” I asked Monk about their teaching experience and he said, “We were serious about teaching but we cut-up all the time in the halls. Jeddo was a lot funnier than most people realize.”Susan Murphy, a former council woman for the City of Greenville, said, “He was my mentor on the city council. He was a joy to work with. I met him one day outside the cleaners and he said he was so honored to be named the John D. Murphy Memorial Award winner.”The award was named after Murphy’s late husband John. Greenville Mayor Dexter McLendon, in a personal interview, said of Bell, “It is like losing family. He was the greatest guy that you could just be around and look forward to seeing. He was very talented.He loved Greenville and working on the city council. “On a personal note, he did more for me in city government that anyone else. What I’m thankful for was that Jeddo Bell was part of my life. He left this place better than he found it.” Mayor McLendon also noted that Bell passed away on the same day of the year as former city councilman James Lewis. Between them they served on the city council for 50 plus years. When asked what the city’s plans are for Bell’s replacement, Mayor McClendon said, “We are going to have a grieving period and then the council will seek a person who will fill Jeddo’s seat. We have sixty days to complete that before an appointment would be made by Alabama Governor Kay Ivey.” Bell joined the Camellia City Civitan Club in 2002 and served many rolls in the organization. The club is renaming their scholarship after him. It will be called the Jeddo Bell Camellia City Civitan Scholarship. At the Monday, July 10 Greenville City Council meeting, Bell’s son, Tracey Burnett, spoke to the council members and said, “It is surreal not seeing him (Bell) sitting there. My father loved the city. He gave everything he had to the city and it is refreshing to see a reflection of that in his passing.” Burnett went on to speak that everywhere he went people shared back with him the love Jeddo always gave them. Burnett then expressed his thanks to Mayor McLendon by saying, “I can’t thank you enough for your kind words and actions and the love you have shown my father.” Hewent on to thank the council and city officals in attendance, ending with him sharing hand shakes and hugs. A press release from the City of Greenville follows: The City of Greenville is mourning the loss of long-time councilman Jeddo Bell who passed away Wednesday morning after a lengthy illness. He was 76 years old. Know for his charming personality and love for people and his community, the retired educator began his service to the citizens of Greenville when he was elected to the city council in 1996. In 2016 he was elected to a fifth term as the representative for District 5. Bell served in various capacities during his tenure on the city council including Mayor  Po-Tem from February of 2003 until earlier this year when health issues forced him to step down from that post. Throughout the past 20 years Bell also served appointments on the Butler County Commission for Economic Development Board, the Butler County Industrial Development Authority Board, the Greenville-Butler County Public Library Board the  Greenville Water Works and Sewer Board. “We’ve lost a great man and I’ve lost a very good friend,” Greenville Mayor Dexter McLendon said. “Jeddo gave so much to this city and our city council over the past 20 years. His personality helped bring our council together as a group which made us work well together. Over the years he became one of my best friends and someone I love dearly. He will be missed.” A memorial service will be held for Bell at the Greenville High School Auditorium on Friday, June 14 at 11 a.m.