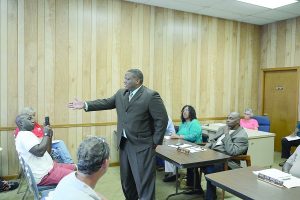 The Georgiana City Council recently introduced the new Georgiana School principal Curtis Moorer to the community at their Tuesday, July 11 meeting. A packed housed was in attendance for the greeting along with citizens who came to watch recognitions from Georgiana Police Chief Carlton Cook to the members of the Long Creek Missionary Baptist Church Drill Team.

Mayor Jerome Antone introduced Moorer to the audience saying that he had been a part of the interview process and that he found Moorer to be articulate and intelligent.

Moorer then stood and spoke to those in attendance about his excitement and enthusiasm for the upcoming year and that his door was open to the community. He also introduced his wife Shayla and his two children.

After a short conclusion of business, Chief Cook then stood and recognized the Long Creek Missionary Baptist Church Drill Team and their sponsors for their success at a recent event in Kansas City where they won 1st place in Category 3, which represents drill teams organized for six or more years.

Chief Cook went on to speak that the drill team’s purpose was to encourage discipline and respect for others. He also added, “It is a great way to spread the word of God through synchronized movements. It is a positive thing for our community.”