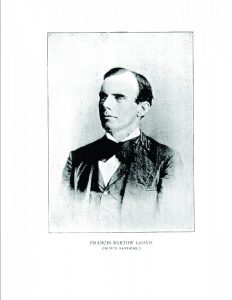 Special to The Greenville Standard

Mollie Waters will be the guest speaker at the next quarterly meeting of the Butler County Historical & Genealogical Society (BCHGS) on July 30 at 2 p.m. at City Hall.

Waters’ topic will be “The Life and Death of Francis Bartow Lloyd.”

Waters has lived in Greenville most of her life and finds Butler County history to be quite fascinating.

“I’m a member of the BCHGS,” said Waters, “and through my affiliation with them, I have been able to do a great deal of research on my family’s history in the county. My ancestors were some of the earliest settlers here.”

It was during some routine research about her family that she stumbled upon the topic she will present on July 30.

“I was looking at some newspaper clippings from ‘The Greenville Advocate’ in the historical society’s file for the Seale family,” explained Waters. “My great-grandmother was a Seale, and I was using the file to get some additional information about her family.

“One of the more interesting newspaper clippings had a date on it, so I decided to find the original copy of the newspaper for more information. Those papers, which date back to the 1860s, are located at the court house.

“When I found the original paper, which was dated Sept. 1, 1897, I noticed the headline on the front page that said ‘A Shocking Tragedy: Hon. F. B. Lloyd Shot Down in the Public Road’, and I started to read.”

What Waters discovered was a story of intrigue, suspicion, and murder, but she also found out a great deal about a Butler County resident who was a well-known writer in his time.

“Francis Bartow Lloyd was the murdered man whose name was splashed across the headline,” said Waters. “I had never heard of him, and I quite literally found his story by accident, but in reading about him, I discovered a citizen of our county who was something of a celebrity during his lifetime.”

Waters’ research resulted in a publication about Lloyd on the “Encyclopedia of Alabama” website and several presentations about him in other locations, including one in Tampa, Florida.

“Lloyd’s writing is along the lines of the ‘Old Southwest’ humorists,” said Waters. “His tales of country life and his characters are similar to the Simon Suggs tales by Johnson Jones Hooper, but they are written much later than Hooper’s works.”

Waters believes the program she will present at the next BCHGS meeting will be one that many area residents will enjoy.

“There’s literature, there’s history, and there’s murder,” said Waters. “What more can you ask for?”

Waters will present her program on July 30 at the BCHGS meeting at City Hall at 2 p.m. The program is free and open to the public.