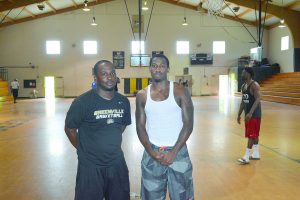 GHS Basketball Coach Marcus Mickles (left) stands with Nick McHenry before the beginning of the Beat The Odds basketball tournament at the GMS Gymnasium. (Bruce Branum | The Standard

Pro-basketball player Nick McHenry recently returned to Greenville to host his third “Beat The Odds” basketball tournament in Butler County this past Saturday. McHenry, who is a graduate of Greenville High, stated that he came to Greenville in 2005 and has a love for the Greenville area and wanted to give back to the community. After leaving Greenville to attend Shelton State in Tuscaloosa, he then transferred to Lemoyne- Owen College in Memphis, Tenn. From there went onto play in a semi-pro basketball league in Seattle till last year when he started playing world professional basketball in Porta St. Georgia, Italy. When asked about the title name “Beat The Odds”, McHenry said, “It is my motivational clothing brand for people of all races and gender. We all face adversity at some time. It is really about a mindset that you can overcome. Coming from a small town and going to play in big places, you are always the underdog and is why I started the brand. “I hope to continue hosting these tournaments because it gives kids a chance to see what perseverance and hard work can achieve for them. Today, we have several pro types of basketball players who are playing.” Three years ago, he started hosting “Beat The Odds” basketball tournament in Butler County. The first two were in Georgiana and he was appreciative for being allowed to have the tournament in Greenville this year. “Proceeds from the tournament will help support the Greenville High School basketball team,” said Head Coach Marcus Mickles. “I definitely want to support the event for its effect on the kids and the community.”