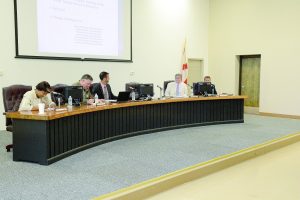 Butler County Board of Education members along with Dr. John Strycker (center). (Bruce Branum | The Standard

Discipline and direction were the main items of discussion at the recent Butler County Board of Education Meeting (BOE) this past Thursday. After the meeting was called to order, the board approved the agenda which mainly focused on presentations by new hired Superintendent Dr. John Strycker. Attending his first BOE meeting Dr. Strycker displayed his earnest belief in involvement in every aspect of the school system. His first presentation was to recognize the Greenville High School football program, honoring four players and Coach McLendon for their leadership commitment on and off the field. Organization of the school system was his next presentation saying school principal involvement from teachers to building support staff was essential under his guidance philosophy. His focus areas for 2017-2018 include student achievement, climate, facilities and technology, communications, evaluation process, safety and security and fiscal responsibility. Climate of the school environment was the main factor in student grade scores, Dr. Strycker indicated. He wants to strengthen and expand facilities and technology and communications and public relations will play a big role in the overall success of the school system. Dr. Strycker made his next presentation on alternative school and the habitual offender process. The current policy manual was pretty tight he indicated, but after meeting with his principals they all agreed direct parent involvement should come sooner in the 15 step process. After eight disciplinary actions against a student a parent would be required to spend a day in the classroom with the child. The board members responded by saying there was no way to require parents in that manner. A discussion then occurred between the board, superintendent and principals, with several of the principals speaking to their agreement on the 15 step process. Board member Linda Hamilton indicated she wanted fewer steps, saying in essence, that habitual offenders hampered teachers doing their jobs. Dr. Strycker brought the discussion to a close by saying they would tweak the process. He then thanked those involved in the discussion, saying this type of board meeting was exactly what he wanted to have and the community to see. He next presented the items he must ensure happens in the school system, which include: that students are not hungry and have adequate healthcare; that there is a safe and disciplined environment at school; that school and community work together to provide a family atmosphere of support for the students; that a high level of instruction occurs; that instruction and modeling of life skills occurs and that the school system have sound finances, facilities and technology. After Dr. Strycker’s presentation, the board moved on to the next order of business, which was Item 10 and concerned the bid for dairy products. The board expressed their concern about there being only one bidder but felt they had done their duty when solicitations for bids went to several vendors and only one responded. The personnel report followed giving the board notice of resignations, retirees, new hires and re-hires. Three resigned; one retired; there were 12 new hires three re-hires. With that presentation made the board adjourned.