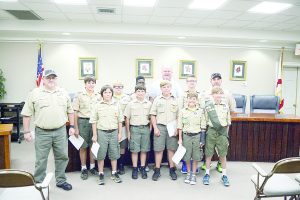 Greenville Mayor Dexter McLendon is pictured with Boy Scout Troop 520, who is sponsored by First United Methodist Church of Greenville, after the Tuesday, August 1 council meeting. (Bruce Branum | The Standard)

The Greenville City Council recently voted to increase the city’s sales tax rate from 4 to 4.5 percent this past Tuesday, August 1 in order to pay for the purchase of L.V. Stabler Hospital. Anyone shopping in Greenville will pay a total of 10 percent tax for most items come September 1.

Examples of items excluded include insurance, cars, house trailers, truck trailers and semi-trailers. All businesses are expected to pay the new tax collected by October 22.

According to Greenville Mayor Dexter McLendon, the state collects 4 percent and the county collects 1.5 percent which when added to Greenville’s forthcoming 4.5 percent tax makes the grand total 10 percent. The mayor added that Greenville’s tax rate has not been increased since 2003.

The increase will affect most items of tangible personal property sold at retail in Greenville, to include vending machines and entertainment. All council members voted ‘aye’ in a roll call vote to unanimously support the increase.

In other business at the meeting the council voted to approve a renewal of a land lease with Dean E. Boan for Boan Dirt Pit #2. They also approved giving preliminary approval to the issuance and sale of Series 2017-A general obligation warrants and Series 2017-B taxable general obligation warrants and authorizing the execution and delivery of a purchase contract with the underwriter for the warrants.

The council then approved payment of expenditures and with no other business they adjourned.

In the previous council meeting on Tuesday, July 18, Mayor McLendon announced the three local citizens who would serve on the board of the newly created Health Care Authority of the City of Greenville. Two other board members will appointed by the University of Alabama Birmingham.

Mayor McLendon expressed to Dunklin how proud his father would be that he is serving on the Health Care Authority at that meeting.