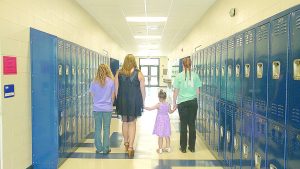 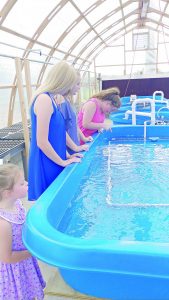 MHS students Kristen, Tabitha, Sarah and Aria looking into one of the Aquaponic water tanks. (April Richey | The Standard) 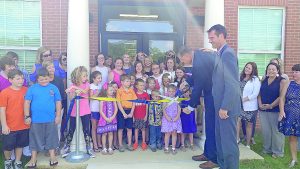 With so many things going on in and around Butler County lately, the small town of McKenzie has had no shortage of excitement. Principal Miles Brown has been one busy man trying to keep up with different events that have required his attendance, but, none more important than the official opening of the new additions to McKenzie School.

Former Butler County Superintendent Amy Bryan began the process of helping McKenzie School get 1.3 million dollars for building improvements. In order make room from the new building, the old wooden building that housed five classrooms had to be torn down.

The new building is considered the high school building and will have seven classrooms for grades 6-12. “All we got was a building; it took a lot of work to get other things that were needed for the building. For example, new lockers were $16,000, new science tables and lab chairs were $5,000, a new intercom system which was $21,000, each room in the new building has new interactive projectors and all up to date technology which cost over $45,000” states Principal Brown.

The McKenzie PTA contributed $6,800 for new storage cabinets in every classroom. After the construction began on the new building, a problem arose with the septic system, causing a need for another $64,000 in additional funds for a new system to be installed. These were all funds that were needed on top of the 1.3 million for the building.  According to Brown, they were able to secure funding from other sources to help offset all the additional costs, in order to get what was needed for the building.

Prayer Walk has been a long time tradition at McKenzie School. Local churches and members of the community come together with students, parents and faculty to pray over the school and classrooms for the upcoming school term. With the prayer walk already being planned, it was the perfect opportunity to host the ribbon cutting for the new building.

New Butler County School Superintendent Dr. Strycker stood proudly beside Principal Brown and several students as the scissors cut the ribbon officially opening the new building. A few class of 2018 seniors, Dana Richey, Lauren Pierce and Maggie Brown went through the classrooms in awe of all the new equipment.  Opening lockers, turning on light switches, and playing with the new hand dryer in the ladies room, these young ladies were like kids in a toy store. Meanwhile, new K4 student Aria Bush was just taking it all in, and trying to keep up with the big kids.

With all the new improvements, the elementary halls have now been able to open up additional rooms as well. This year there are two classes from K4 to 5th grade. The main building is now all elementary classes.  While the graduating class size is only 36 students, most of these students began kindergarten here and are now all graduating together.

There wasn’t just one ribbon cutting, there were two. The new Aquaponic Green House was also officially opened today.  Thanks to a $40,000 grant that was awarded last summer through Jennifer Burt and the Career Academy.  Students will be able to grow fish and plants. The water and waste of the fish will be circulated through the system to fertilize the plants. “It’s a really really neat program, and it gives our kids a chance to have a lot more hands on activities, instead of just sitting in a classroom.” said Brown.

With all the excitement of the new High School Building and Aquaponic Green House, let’s hope that all the long time rumors of closure is respectfully over. Students are geared up to reconnect with friends, and get ready for some Tiger football and volleyball. If you want to know more about what the entire buzz is around McKenzie, then please get involved. Quarterback Club and PTA are always looking for more volunteers. Future events are as follows: