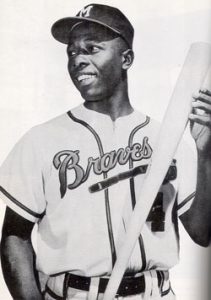 Henry (Hank) Aaron was born February 5, 1934 in Mobile, Ala. He played 23 seasons in the Major Leagues for the Milwaukee/Atlanta Braves and the Milwaukee Brewers from 1954 through 1976.

1957 was arguably his best season. He hit .322 that year with 44 home runs and 132 RBI, captured the National League MVP Award and led the Milwaukee Braves to their first World Series Championship since 1914.

Major League Baseball named him one of the Top Four Living Baseball Players. He was named to Major League All Century Team.  He was inducted into the National Baseball Hall of Fame in 1982.  He was awarded the Presidential Medal of Freedom in 2002.

He help lead the Crimson Tide to an undefeated season in 1961 and in so doing won the SEC and a National Championship. In his final game for the Tide, Jordan recorded 31 tackles in a 17–0 victory over Oklahoma in the Orange Bowl. For his efforts he was named MVP.  He was also named Lineman of Year that year (1962).

He was a member of the College All-Star team that defeated the NFL defending champion Green Bay Packers in 1963. He was the six overall pick in the 1963 NFL Draft by the Dallas Cowboys. He became an instant starter at middle linebacker and anchored what became known as the Dallas “Doomsday Defense.”

In that same year he was named NFC Defensive Player of Year. When he retired, he became the Cowboys all-time leader in solo tackles (743).  During his career he intercepted 32 passes, returning three for touchdowns. He was selected to Cowboys Silver Season All-Time Team.

In 1989, he became the seventh member of the Dallas Cowboys Ring of Honor. He was inducted into the College Football Hall of Fame in 1983. 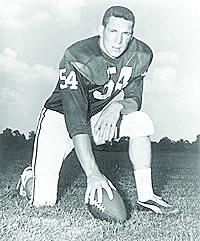