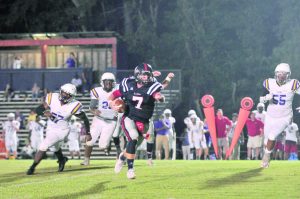 From the first kickoff to the Eagles, where Zach Winters returned it for 85 yards and a touchdown, Fort Dale began to fly.

Winters would next make a 32-yard touchdown on a pass from quarterback Luke Taylor, giving the Eagles a 13-0 lead. Winters would rush for 101 yards on three carries and have 89 yards on four receptions.

Zach Kendrick scored next on an eight yard run for the Eagles, answering a touchdown by the Lions. He would rush nine times for 98 yards and two touchdowns.

Luke Taylor was the next Eagle to cross the goal line. He would rush seven times for 61 yards and two touchdowns. In passing, Taylor went 6 for 12 passing with 141 yards and one touchdown.

By the half Fort Dale led 41-12 and the starters sat out most of the second half. Though the Lion’s managed to make some scores in the second half, the experience gained by the second string players will be valuable in later and tougher games.

Fort Dale will next play at home against Wilcox Academy this Friday night at 7 p.m.