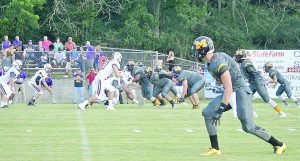 Friday night was the season opener for both McKenzie Tigers and the Ariton Purple Cats. Ariton spared no mercy on the McKenzie Tigers, with an early lead of 29-0 leading into halftime and winning 42-6 by the end of the game.

McKenzie Majorettes and Cheerleaders did a great job keeping the morale of the crowd up and cheering on the Tigers.

Coming back onto the field from a much needed break, McKenzie Tiger #3 Quandario Lee scored the only points the tigers would find in this tough game late in the 3rd quarter.

Ariton picked up another seven points to end the 3rd quarter 36-6. With a little over nine minutes left in the game, the Purple Cats scored another touchdown, but the kick was no good.

Nearly a dozen penalties plagued this game along with a few injuries. McKenzie Tiger #55 Dillan Sanders was helped to the locker room and then later checked out at the hospital. He will not be returning to play for the Tigers this season.

McKenzie quarterback #1 Daniel Gaston took a hard hit and sat out the latter half of the 4th quarter with #14 Skylar Zamjahn taking Gaston’s place. Zamjahn was able to help hold the Cats back, but Ariton took the win over the McKenzie Tigers.

The Tigers are going to spend the week reviewing what went wrong, and practicing on correcting mistakes. McKenzie will take on the Geneva Panthers this Friday night in Geneva with kick off at 7 p.m. Good Luck Tigers & Go Big Blue!