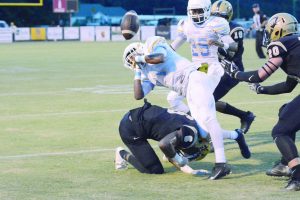 Greenville High’s Tigers first test of the season came this past Friday night and they proved worthy winning 33-22 in a practice game against the Selma Saints.

Tiger quarterback Javion Posey would make the first score for GHS with a 25-yard touchdown run. He would later score after a key reception by Malik Bunch.

Arick Boggan scored twice on runs after Posey’s initial touchdown and the Tigers led 20-0 at the half. Jabez Sims would make the final touchdown on a reception from Posey.

Despite a comeback try by the Saints, Greenville held on for the win.

McLendon stated he was proud of his team but wanted them to be a four quarter team. Their next game is at Beauregard, a powerhouse, this Friday night at 7 p.m.