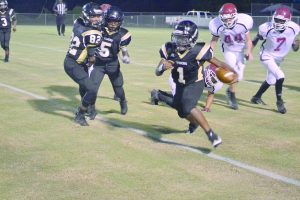 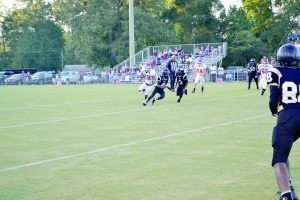 #9 makes the outside and cuts up-field as #3 gets ready to block the pursuing tackler. (Clay Branum | The Standard)

Middle School head coach David Kirkland said, “We are surprised with the way we responded the first half. We came out strong the first half. It was ours until we gave them the ball in the last quarter. We are proud of all of our players.”

Small penalties and mistakes plagued the Tigers through the game. Several offside and false start penalties kept moving the Tigers back and Bulldogs forward.

Greenville held together to put the first six points on the screen and denied Andalusia the ability to score until the second half.

The last quarter of the game came to a clinch with a fumble by Greenville allowing the Bulldogs the option to score the Tigers defense stood up tall running out the clock ending the game 6-6.