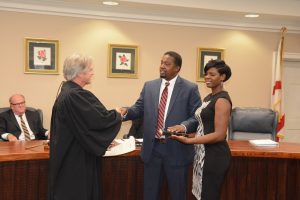 Bell served on the council for 21 years and was elected to a fifth term in office before his health required him to step down.

When asked about his selection for council Thigpen added, “I love Greenville and the people and I am genuinely concerned about the well being of the city. It is an honor and a blessing to represent District 5 and I look forward to working with the rest of the city council to see the City of Greenville grow.”

Mayor Dexter McLendon said of Thigpen, “I feel like Boris is going to be the perfect person for us to follow what Jeddo always did. In our interview he really impressed Mr. Lawson and myself.”

McLendon went on to add that he had always seen Boris a young boy, but all the sudden he was 38 and said, “I think he is perfect for us.”

Thigpen and his wife have three children and he works at Hynudai Motor Manufacturing in Montgomery. He is a graduate of Greenville High School and was a respected athlete. He dearly respects the opportunity to replace Bell as councilman and stated he has big shoes to fill.

All the council members welcomed Thigpen to his seat on the council as did friends and community members. Though he intends to listen and learn Thigpen became involved in the meeting and seconded several motions made by Mayor McLendon.