The Georgiana Panthers faced off this past Friday against area rival and region 1A opponent the Brantley Bulldogs. By the end of the game the Panthers who were in control mostly throughout the game would win 26-15.

The Bulldogs fought hard but just couldn’t keep up with the speed of the Panthers.

Georgiana quarterback Jamichael Stallworth connected early with receiver Jamarcus Sims to give the Panthers the first score of the game in the second quarter. The Panthers did not complete the 2-point conversion.

Brantley answered quickly on a long interception run-back which drove the ball close to the Panther’s goal line. The Bulldogs punched it in and then kicked the extra point giving them a 7-6 lead.

Georgiana came right back with fire and Stallworth found receiver Chris Mixon for a 27-yard touchdown and the Panthers regained the lead 12-7.

After the half, the Bulldogs proved the nature of their name correct and fought to the very end of the game. Brantley controlled the ball for most of the third quarter but the Panthers stood their ground and kept the Bulldogs out of the end zone.

It was Georgiana’s turn next and they scored on a screen pass from Stallworth to Sims which covered over 70 yards.

Brantley answered the Panther touchdown with their own but on the ensuing kickoff, Georgiana wide receiver Christian Williams returned it 80 yards for another Panther score and sealing Brantley’s fate.

It was the third win in a row over Brantley for Georgiana. At game time the Bulldogs were ranked #3 and Georgiana was ranked #6 in the region.

The Panthers are now 4-0 and will travel to St. Luke and face the Wildcats this Friday at 7 p.m. Coach Ezell Powell expects another hard game. 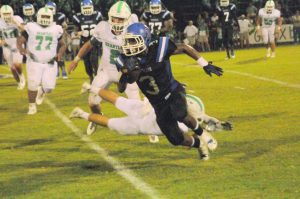 Georgiana WR Christian Williams, #3, makes a Brantley Bulldog miss as he turn to head up field. (Clay Branum | The Standard)