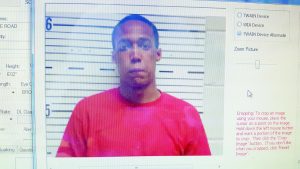 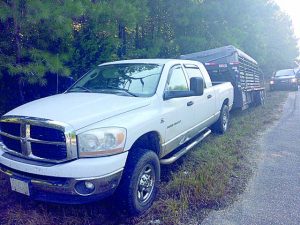 A Dodge truck and cattle trailer from the McKenzie
area which was stolen by Orran Scruggs. (Submitted)

The Greenville Standard Orran Scruggs, 19 and a resident of Shine Road, was recently arrested by the Butler County Sherriff’s Department this past Tuesday for stealing a Dodge crewcab truck and cattle trailer from the McKenzie area. According to Sheriff Kenny Harden, his office received a call last week concerning a truck and cattle trailer that was loaded with cattle and was located on County Road 59 that looked very suspicious. Sheriff Deputies responded and could find not find anyone on scene, but did notice damage to the cattle trailer. At 5:30 a.m. that morning Sheriff Deputies made a report on an 18-wheeler that was hit. The 18-wheeler was parked at the intersection of County Road 59 and Alabama Highway 106. Deputies noticed fiberglass debri from the 18-wheeler being hit and correlated it to evidence found on the cattle trailer. The owner of the truck and cattle trailer was contacted and Sheriff Harden indicated the victim thought someone was playing a joke on him. The cattle trailer had been previously loaded with five cows and a calf the day before and was waiting to be taken to the stockyards for sale. The victim assumed a person working for him had picked up the truck. After investigation, a suspect was identified and contacted. He confessed and is being held in the Butler County Correctional Facility. Scruggs was charged with Leaving the Scene of an Accident and Theft of Property First Degree. Scruggs is also reported to have a hit power pole and phone pedestal in the McKenzie area. Sheriff Harden indicated Scruggs did not know there were cows in the trailer, and that Scruggs said he needed a ride home and took the truck.