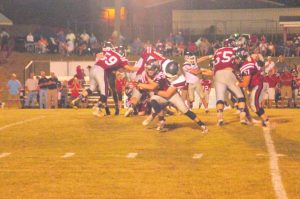 Fort Dale’s home game against Lee Scott Academy this past Friday night ended with the Eagles improving their standings to 5-1 with a win over the Warriors 25- 13. The Eagles showed clear defensive and offensive dominance in the first half of the game, putting up 25 points on the score board and denying the Warriors the opportunity to score until after half-time. In the second half, FDA’s defense kept up the pressure and only allowed Lee Scotts’ offense 13 points by the end of the game. Quarterback Luke Taylor proved his worth on the offense as well as defense Friday night having completed 5-10 passing with 118 yards, 27 rushes for 180 yards and three touchdowns. Injury recoverees Tripp Richardson and Jason Little would both catch multiple Taylor passes for a combined total of 155 yards. Cade Mansmann helped Taylor on the ground game by gaining over 60 yards on 10 carries. Standing solid together for the defense, both Baron Brack and Braxton Daniels made eight tackles each. Coach Sampley said, “This was the game that kick started us last year going into the second half of our season. We got points early this game and held on to the end. If we can build from that, manage our injuries and keep going, then that is the key to this game.” FDA will play at home this Friday night against region opponent the Morgan Academy Senators this Friday night.