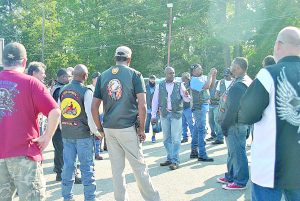 Bikers have always had a hard time getting past the bad reputation that television and movies have bestowed upon them. With long beards, and lots of leather; bikers have been portrayed to be nothing but trouble. Most people see a biker and unfortunately will go out of their way to not make contact with them. The true biker is not made up what they look like, or what they wear, but rather what they do. There are many bikers out there that don’t fit the “biker image”. But that doesn’t make them any less of a biker. Biker by definition is a motorcyclist. Being part of the biker community is a position every biker holds to a higher standard. Bikers have been known to hold many fundraisers for families with dire emergencies, and even had fundraisers for our four legged family members. Where there is a need, you will find a biker willing to help!  Our local boys in blue are no stranger to controversy lately either. The men and women of law enforcement have been fighting to protect their families and community against some of the same issues bikers are faced with. It is easy for someone to stereotype and judge someone based on appearance. And this has been a hard battle everyone has fought at some point in time in their life. On Saturday, Sept. 30, in the parking lot of the local Food Giant, Georgiana Police Chief Carlton Cook stepped into a large circle of diverse people. People from all walks of life, including lawyers, agents, paper makers, bus drivers, business owners and every day laborers stepped up and all bowed their heads in prayer. One by one as the heads came up and their eyes opened, the once diverse group of people stood as one united family of Brothers and Sisters. Race, color, age or religion no longer mattered. Chief Cook’s goal is to continually implement ideas and ways to strengthen unity efforts throughout the community, and with this ride he has a very successful start. Motorcycle clubs and independent riders from all over the south showed up to show their support for what Chief Cook is trying to accomplish. With Chief Cook leading the way, the bikes all fired up and headed south on Alabama Highway 55 by way of police escort to get the ride underway. Harleys, Goldwings, Crotch Rockets and Trikes all rumbled past people pulled over with their phones out taking pictures and videos of this amazing site of bikes. The riders all stopped for lunch in Opp at Doc’s Country  Store. Along with good food, there was also great fellowship. Sed Rogers a local Evergreen Business owner states “Most bikers that I know are active in the community, church and other events, we just use the bike as a form of entertainment and camaraderie when we come together. “I don’t see this as a biker community, a black community or a white community, we are just a community. With everything on social media lately I think instead of talking at each other, we need to talk to each other. That means sitting down to lunch and not getting on Facebook.” stated Brandon Sellers, local Greenville attorney. When asked what most riders hoped to get out the ride, there were a lot of mixed answers. Some made jokes about getting to know the local police to help get out of tickets in Georgiana, but the most repeated answer was, creating a unified community through fellowship with other riders and police officers. “This effort will bring everyone the opportunity to each other in something we all have in common. This ride is just one of many more scheduled along the way,” stated Chief Cook. What was set for a 100 mile ride turned out to be a little longer than Chief Cook had planned but there were no complaints from the riders. The route was slated to start in Georgiana then head to Andalusia, Opp, Highland Home, Hayneville, Greenville  then back to Georgiana. The ride was however shortened  when a gas stop just north of Highland Home logged the ride at 108 miles. Chief Cook decided to head to Greenville Sonic and enjoy ice cream before ending the ride back in Georgiana. Thanking everyone for joining the ride, Chief Cook shook hands and everyone parted ways. This is just one step in overcoming some of the judgments and issues that we all face every day. One bad cop doesn’t mean that all cops are bad, and one bad biker doesn’t mean all bikers are the same either. This truly was a Unity Ride. The youngest rider was 17 and the oldest was 72. Chief Cook has extended an invitation for all bikers to come be a part of the Georgiana and McKenzie homecoming parades on October 6. The McKenzie parade will begin around 1 p.m. with Georgiana beginning around 1:30 p.m. There should be enough time to participate in both. Please contact Chief Cook if you wish to ride in the parades or need more information.