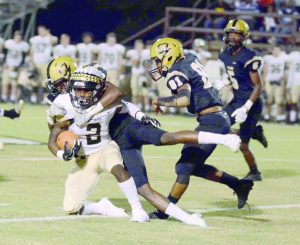 It was a tough night for the defense of Greenville High School Tigers as they fought the Wetumpka Indians. (Photo by Gregg Fuller

For the first quarter, it seemed the Greenville High School Tigers were able to match the physical prowess of the Wetumpka Indians, but by the fourth quarter, the Indians proved their ability to keep the Tigers caged and won 51-14. The Tigers and Indians were at a 6-6 standoff at the end of the first quarter, but Wetumpka took control and never looked back. It was a hard fought game, but the Tigers could never get their claws in the Indians as their quarterback Jadarious Martin was an elusive quarry. He would score three times on explosive plays. By half time the score was 26-6 and Greenville would never catch up. Even injured Tiger quarterback Javion Posey was called back to action, if only just to hand the ball to a runner. The Tiger path ahead is a tough one. They face a road game against Eufaula this Friday night. Even though Eufaula has the same region record as the Tigers, 1-1, Head Coach Josh McLendon knows it will be a fight. He hopes to have a good practice week in preparation for Friday night’s game and also hopes to have several injured players return. The game is set for 7 p.m.