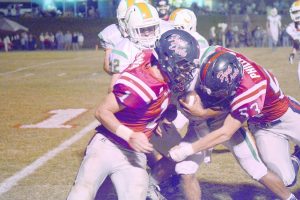 The Fort Dale Academy Eagles homecoming game against the Hooper Academy Colts brought two great pieces of news for the fans with their 50-27 victory this past Friday.

First, it meant that homecoming was not a let-down, and secondly, the Eagles have secured a #2 seed in the playoffs and will host Bessemer in the first round.

The first half looked as if the Eagles would have a tough fight for the whole game against the Colts as it ended with both teams tied 21-21.

The second half brought a renewed vigor for FDA and the defense turned up the heat on the Colts recording three interceptions. With the turnovers by Hooper the Eagles were able to capitalize on them and secured a solid win.

On offense, Eagle quarterback Luke Taylor continued to prove his stature as one the best players in the Alabama Independent School Association by rushing for 219 yards on 19 carries and claiming five touchdowns.

Zach Winters had 10 rushes for 119 yards and a 60-yard touchdown run. Jason Little was the ‘go to’ receiver and caught four passes for 96 yards and also had a touchdown.

Defensively, Zach Kendrick led the team in tackles with 14, while Tripp Richardson, Bryan Folds and Jason Little each had an interception.

FDA is now 7-2 for the season with one game remaining. Their only losses have come against Pike Liberal Arts and Monroe Academy.

The Eagles will play at home this Friday against Lakeside Academy. Kickoff is set for 7 p.m.