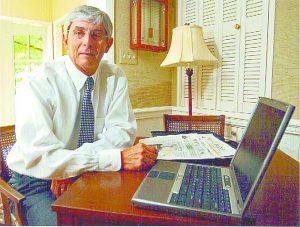 My parents, Claire and Gene Anthony, were good friends with Jane and John Orme. They often had Friday night dinner together. My Dad was a highly successful Agent for Liberty National Life Insurance Company and Mr. John was the owner of Brior Auto Parts which in the 1960s was located a block from the Courthouse on the north side of Commerce Street.

One Friday night when the Ormes were having dinner with my parents at our house Mr. John told me that he wanted to hire me to work for Brior in the summer (1962) but that I was too young. I immediately thought, “Oh boy here we go again.” (Remember Mr. George McCrory summoning me to his store to tell me the same thing although he was able to correct the problem?)

It turned out that Mr. John wanted me to drive a company vehicle delivering auto parts and at 17 years old I was too young. I had not thought about working for Mr. John but he was another of the Greatest Generation and a small town self-made businessman who loved his company and what he was doing.

Most of life is about personal relationships. For me I’ve always been a car nut and at least this would have had me delivering auto parts and walking through automobile showrooms. It sounded like fun but it wasn’t to be.

However, I was looking for summer employment so I asked him what the pay would have been anyway. He gave me the amount per hour which worked out to about $60 per week.

Sometime thereafter I was in the country club locker room with Harold (Louchee) Chambliss. He had been the lifeguard at the country club for several years. He thought he would take the job again but he really needed to make more money.

At the time Louchee was a rising junior at the University of Alabama. One of the things I loved about Greenville then was that ages made no difference. We had both been in the GHS band, Louchee along with Dr. Aubrey Stabler, playing battling trumpets and me an outstanding (my opinion) snare drum player.

Louchee and Aubrey were also good basketball players, Louchee with his ‘what would be now a 3-point shot’ from the corner and Aubrey at center with his first step being his left foot behind the defender’s body on the way to the basket.

Louchee was a rising junior at UA and I was a rising senior at GHS but age was no barrier. This made me start thinking about both of us needing a higher paying job for the summer. I called Mr. John and explained the situation to him. If he hired Louchee I might be able to get the lifeguard job.

Soon Louchee was working for Brior Auto Parts on the card desk and delivering auto parts.