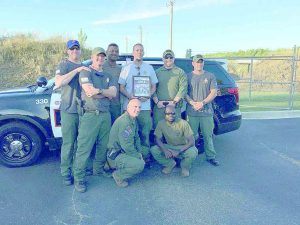 The Greenville Police Department (GPD) recently won first place when they participated in the annual state-wide SWAT competition that was held in Columbiana in Shelby County.

According to GPD Chief of Police Justin Lovvorne, the competition takes a lot of skill, hard work, and quick thinking on the part of its participants.

“You just train as hard as you can. Try to get in as good physical shape as you can. Be tactically sound. Then go up there and do the best as you can do”

Lovvorne said each competition team has up to eight people with as many as six people being able to compete at one time in each event.

In order to decide who in the squad would participate in the state competition, the GPD held a local preliminary competition first.

“Every year, we kind of have our own mini-competition here in Greenville before the state competition to see who out of our team is best suited to go,” said Lovvorne.

He added that the mini-competition serves the purpose of seeing who in the squad is having the best year, who is in the best shape, and whose shooting has improved the most.

Lovvorne said the three months leading up to the state competition was strenuous for the local competetors, but it has resulted in some benefits as well.

“It improves our team overall to handle anything around here as well,” said Lovvorne. “It kind of gives us motivation to keep our training up.”

Lovvorne said the GPD SWAT team competed against ten other teams from around the state, though there were other teams that took part in training sessions.

According to Chief Lovvorne, the way the competition is set up changes each year, but there are some basic elements of it that stay the same.

Lovvorne said his team has enough diversity in sharpshooters, runners, and weight trainers that it helped push them to first place, beating out ten other teams from around the state that competed this year.

He is very pleased with the SWAT team’s results and wants others to know just how impressive their win is.

“You can’t put into words how much effort this took, and skill and ability, to do it,” said Lovvorne.

The GPD team has placed in the top three during the last four out of five years and has won first place two times in the last five years.

The team’s success has brought them a great deal of attention from different agencies throughout the state.

“They have made such a good name for themselves throughout the state,” said Lovvorne. “We are well recognized and called upon. We’ve even taught SWAT classes now. Our guys have been instructors at SWAT schools.”

The GPD SWAT team hosted a school about a year ago and has been asked to host another one already.

“They are one of the best in the state,” said Lovvorne. “I am very, very proud of them.”