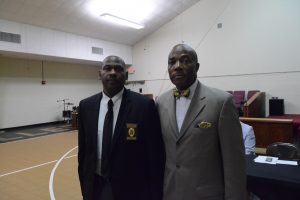 The Concerned Citizens of Butler County is a newly formed organization that is making its presence known throughout the county. This group has been attending all city council, school board, civic league and county commission meetings in an effort to introduce themselves and their mission to the leaders of Butler County. They have gathered information, shared it  with the community and have already begun to make positive changes in the county. On Thursday night, they formally introduced themselves to the community during a Town Hall Meeting at Lomax Hannon auditorium. Citizens were invited to express their views and concerns relative to politics, economics, education, recreation, crime, community, elderly and children relations, or any other topic that they felt was important for the betterment of Butler County. President Kenneth Crum gave the history of the organization and advised citizens of their mission to make Butler County a better place for all citizens to work and live. Their goal is to accomplish this through cooperation with the city and county government, school agencies and affiliates, and law enforcement. Crum acknowledged God as the head of the organization, and emphasized that the group is serious about what they are doing. He encouraged everyone in attendance to get involved in what is going on in the county. Special guest, Paul Mitchell, Senior Probation and Parole Office shared information outlining the process by which a convicted felon could be granted a pardon and have their voting rights restored. Mitchell stated, “We have to become a part of the political process, and in order to do that, you need to be able to cast your vote.” Vice-President, Robert Blankenship moderated the Town Hall Meeting. Many of the questions and comments were centered on youth, and included bullying, recreation and parental involvement in their child’s education. While citizens showed passion and concern in their questions and comments, it was evident that all were eager to see this organization move forward and many offered their support. The members of the BCCC were equally as passionate about their determination to fulfill their mission of empowering the citizens through unity, and encouraging them to be a part of the positive changes that everyone wanted to see. President Crum shared these thoughts on the meeting. “To God be the Glory! What a great victory. The Butler County Concerned Citizens town hall meeting was a great success. I would like to thank the BCCC’s officers, committee chairs, members and anyone that sent an email, posted on face book, tweeted, chatted, passed out a flier or did anything to help. “We achieved our town hall meeting goals. We disseminated a great deal of information that our community needed to know and we heard from the community. Going forward we will compile this information and use it to address the needs of the community.” The groups contact information is as follows: www. butlercoconcernedcitizens.org; Email: info@butlercoconcernedcitizens.org; Phone: (334)662-9369/Facebook/Twitter/Instagram.