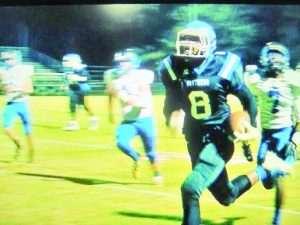 This past Friday night you could really feel the approach of winter at the first round of playoffs in Georgiana. The Georgiana Panthers whipped the Winterboro Bulldogs soundly 64-0.

After closing their regular season 10-0, Georgiana stepped into the first round like they belonged in the playoffs. The champion of this game was more than obvious by the second half.

During the first half, Georgiana’s offense hit hard and often, scoring five touchdowns The Panthers defense also held fast with Chris Mixon snagging an interception and denying Winterboro that opportunity to cross the goal line. By the end of the first half Georgiana led 30-0.

Going into the second half, the Panthers continued to show their dominance on the field with Winterboro continuously showing the lack of ability to budge either Georgiana’s defense or offense. By games end the Panthers walked away with a resounding shutout.

Despite this decisive win for Georgiana, an altercation late in the game could speak disaster for the Panthers. During a kick return, a receiving Panther was struck hard after diving to catch a short kick, which ignited both sides of the field. This could very well see the loss of one of Georgiana’s star players for their next game.

The Georgiana Panthers will host game 2 of the playoffs this Friday night against the Marengo Panthers.