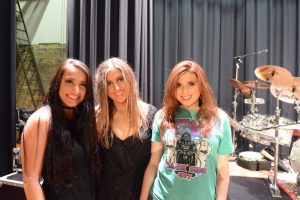 From sound set up to the end of the last Thursday evening’s concert at the Ritz Theater in downtown Greenville, the group Sweet Tea Trio wowed most that listened and were treated to a standing ovation at the end of their performance. The young ladies, who are from Alabama, all live together in Nashville and have traveled the southeast. They will be opening for Alabama in Bismark, N.D. and then will headline their own concert in Seattle, Wash. later this year. They met through a voice coach four years ago and in 2016 they were voted Alabama’s Country Female Artist of the Year. Savannah Coker originally hails from Gasden, while Tuscaloosa is where Victoria Camp calls home and Kate Falcon grew up in Birmingham. Camp said, “We felt very, very loved. It feels really good to be home.” “We didn’t expect so many people to show up and it melted my heart,” said Coker. Lauren Saks, one of the band members who is originally from Chicago and now mainly works from Nashville playing the violin/fiddle, said “The first time I heard the girls I was definitely happy to play with them because I think they are super-talented and have the ability to go wherever they want to go.” Dr. Carol Pope, who was a little hoarse after cheering to and singing along with Sweet Tea Trio, said, “I enjoyed it, as you can tell from my voice. The girls did a really great job.” Tom Braxton said there were over 250 people in the audience and he was all smiles during and after the concert. He said, “It was awesome, just awesome.” David Norrell, echoed Braxton’s sentiments and said he had been well entertained. Nancy Idland, who heads up the Greenville Area Arts Council (GAAC), was also extremely pleased. She said, “We work hard every year to bring four concerts to the Ritz Theater and these girls were amazing.” This is our 36th year at the Ritz and I hope we continue with such amazing performances and that the community continues to support the council’s events.” This was the second of four concerts provided by the GAAC. The next concert will be held on Jan. 25, 2018 and will feature Joe Gransden and his 16-piece orchestra. The songs of Frank Sinatra and friends will be the highlight and Idland hopes the crowd will be swooning by the end.