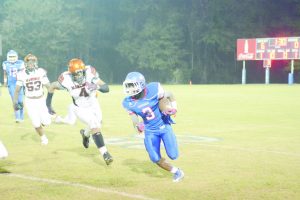 Panther Christian Willams turns the corner while in hot pursuit by a Marengo Panther. (Bruce Branum |The Standard) 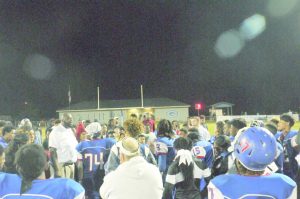 The Georgiana Panther’s 2017 football season has ended with a loss to the Marengo County Panthers 18-0.

It was the first shutout for Georgiana since 2013. The loss was a hard pill to swallow. As last year, the Panthers were beat in the second round of playoffs.

However, the Panthers claimed another extremely successful winning season under the helm of head coach Ezell Powell going 11-1.

Starting off the first quarter Marengo received the kickoff and proceeded their first trek downfield only to be stopped by Georgiana.

The Panther’s defense made strong statements all night, beginning in the first quarter by forcing a turnover from Marengo. The turnover was short lived, ending in a fourth down turnover in which they handed the ball back to Marengo.

Afterwards, Marengo marched to a score and put the first points up on the scoreboard. The Georgiana defense stood up and denied Marengo their attempt for a two point conversion.

Heading into the second quarter, there was little change in the Georgiana offense’s ability to score, while their defense managed to hold Marengo and make turnovers.

Although the Panther defense showed the ability to get the ball back, when the offense stepped out onto the field it was either Marengo defense or a penalty call that kept pressing the ball further back for the Panthers.

Late in the second quarter Marengo carried the ball for their third touchdown, but as in previous attempts could not convert the two point conversion, which left the score 18-0 at the half.

After coming from the locker room at half-time, a new wind washed over Georgiana. The defense held faster to the Marengo offense, denying any other attempt to score for the rest of the game.

The Panther’s scoring force however just could not overcome the defense of Marengo.

Senior Quarterback Jamichael Stallworth said, “They just played better than us in the first half and that hurt us. For our returning players next year, they need to work harder and be better than we are this year.”

Head coach Ezell Powell commented, “Our offense just didn’t give the defense a whole lot of help, they sputtered and half the time when we got something going we shot ourselves in the foot, but we have to take our hat off to Marengo, they did a great job scheming us defensively and slowing us down offensively. We knew coming into the ball game this was going to be a tough one, they are big and fast.”

Coach Ezell expressed his love and gratitude for the players believing in him to lead and that Georgiana will continue being a force to be reckoned with in their division.