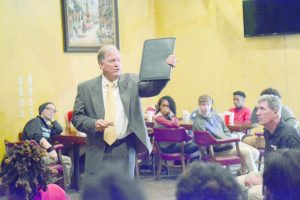 Al Landwehr is pictured speaking to Georgiana track athletes this past Thursday at San Pedros. (Bruce Branum | The Standard)

“Be the best you can be,” said Al Landwehr in a message delivered to the newly formed Georgiana High School track team this past Thursday.

Landwehr was invited by Butler County School Superintendent John Strycker to speak to the team.

Both Strycker and Landwehr gave rousing speeches to the team after a lunch at San Pedros Mexican restaurant in Greenville.

Strycker urged the team to seize the moment. “It will be the last time you have this moment. There won’t be another like this one.” He also spoke of his love for track and displayed a poster of Steve Prefontaine, one of the greatest long distance runners in track history.

He believes Georgiana has an excellent chance to compete for a state track title and told the members that he will personally buy a state track ring for anyone who wins an individual event. He added a caveat jokingly, that the cost of the ring had to be under $300.

“You have a talented group of athletes, you have a coach who has one fifteen state championships and a community that is hungry for something like this and I feel it is a winning combination.”

Landwehr, who ran track with Harvey Glance at Auburn has helped or coached close to 30 state title track teams, will assist the track coach at Georgiana with training schedules and event selection for particular athletes.

Landwehr received a phone call from Strycker inviting him to participate in the formation of the Georgiana track team and Landwehr strongly expressed to the team, “The enthusiasm of this man for this community fired me up. I said, ‘Man, I got to have me some of this. I want to be a part of what is happening to you.’” As he continued the audience came alive and you could hear the belief of the students that they have something special with loud clapping and ovation.

Landwerh said, “I have a vision for this team and the trophy case. Someone in this room is going to do something special.”

He thinks both the boy and girl track teams have a strong chance to win the state track title.