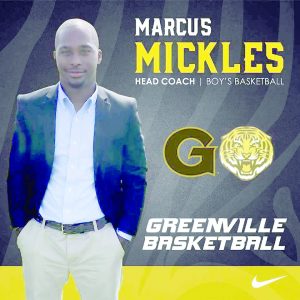 This season for Greenville High School basketball holds high hopes for returning to the finals again. With 10 returning seniors and four juniors, the Greenville varsity basketball team will not be lacking veteran players.

Seniors Malik Bunch and Montez Rhodes will definitely be notable the season. Head coach Marcus Mickles said, “These two are our leading players. They both have played with the team for over three years. We will be looking to them a lot.”

This year Greenville will compete in 18 or more games for the season. When asked of Mickles, who this year’s tough opponents would be, he said, “They are all tough. From the standard games to the rivalries, hopefully everyone plays well and provides a challenge. But we are here to work on ourselves and I want to make sure that we are peaking at the right time.”

The Tigers season last year ended in the Elite 8 games. With the amount of veteran players there are definitely high hopes of returning there and more.

Mickles returned to Greenville in 2014 after completing college at the University of West Alabama where he obtained a teaching degree in physical education. In 2015 he started coaching in the assistant varsity position working his way two junior varsity head coach but eventually he was offered the varsity coach position after the previous head coach left.

Mickles philosophy for coaching these young minds means staying on them. “I know that most of these kids do not have a father figure just like I didn’t have,” said Mickles, “so I will be pushing them in every aspect on the court in the classroom and at home to be successful. I’ll let them know that it will not be easy and not to expect handouts.”

From a head coach perspective, relating to the players can be a challenge. Mickles feels he can relate to these kids. “I used to be them, all the things in everyday life. Coming from poverty and being out in the streets I’ve been where they are. I have their best intentions in mind and they know it.” His message to the players is to take advantage of every opportunity. “They do not come often but when they do you have to take advantage of them,” said Mickles.

For their next home game, GHS will face Hillcrest Evergreen on Dec. 8. The junior varsity game will start at 4:30 p.m.