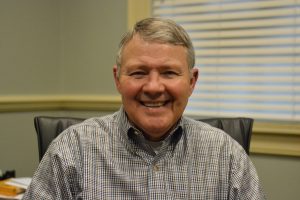 After 44 years in the banking business, Johnson said it was time to step down. He has been with CNB for 14 years.

He feels that there competent people to fill his shoes and they will step up and lead CNB into the future.

“I really appreciate the relationships I have made in the banking business over the years,” said Johnson, and he added, “some of those relationships have been very close.”

Born in 1949 in Monroeville, he moved with his family to Camden two years later when his father took a job with Camden National Bank.

He moved to Greenville in 1993 from Ft. Deposit and considers Greenville to be his home, though he still loves Camden and enjoys hunting and fishing over there.

The most difficult aspect of his extensive career has been loans that are not considered black and white. “It is the uncertainty of whether the loans will be payed back,” said Johnson. He indicated that he has taken chances over the years and been able to help many people.

The people who come in and ask for the small loans are typically the most grateful said Johnson.

Another aspect of the banking business which is difficult is the amount of paperwork now required since the recession by the Frank-Dodd Act.

Johnson now plans to travel and work on his 12-acre place on Sherling Lake Road. He also plans to continue looking for arrowheads and Indian artifacts. An avid arrowhead hunter, he has found some truly interesting points and tools over the years.
Johnson said he wants to thank the many friends, acquaintances and customers he has made over the years for their kindness and support.