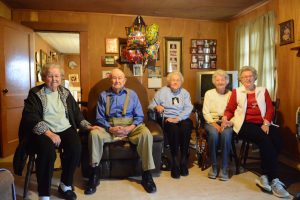 Colonel Jackson Stinson has lived a blessed life. He recently celebrated his 103rd birthday this past Thursday.

Amidst a gathering of family and friends including his four surviving sister siblings, Stinson received warm hugs, cards and several family members sang “Happy Birthday” as they greeted him.

SouthernCare Hospice Pastor, Andy Peavey, sang Stinson’s favorite song “I’ll Fly Away” to the enjoyment of all as several family members, including his surviving sisters, joined in singing. SouthernCare has been providing assistance to Stinson for the past year.

Stinson was born in the Providence community near Georgiana on Dec. 7, 1914. Later his family moved to the Mixonville community in Conecuh County when he was 15 or 16.

He was the second born of 11 siblings, two boys and nine girls, and had to quit school in the third grade as he was needed to help his father on the farm. Later would help his father-in-law on a farm. Stinson said, “We worked a three mule farm, raising mostly cotton and corn on halves,” and he added, “It was a 300-acre farm.”

When he became old enough, Stinson got his first paying job in the pulp wood business sawing logs. At the age of 22, he married 15-year-old Annie Lee Morgan on April 11, 1937 after asking her father’s permission. They would spend 76 wonderful years together and had four children, Iva Dell, Donald, Ruth and Judy. She passed away on March 7, 2013 and it was evident that he missed his wife.

When World War II began Stinson said he approached his employer about joining the war but was told he could do more for the war effort by providing them with wood.

He helped build the railroad tracks around Mixonville which would transport the wood. He stayed in the pulp wood business until he was 62, running four trucks at one time.

After turning his pulpwood business over to his son, Stinson then went to work the Conecuh County road department when he was 70 and worked there until he retired at the age of 85.

Even after that he stayed busy helping others in the community by bush hogging and plowing gardens.

During an interview when Stinson turned 100, he was asked what the key to living such a long life and he said the key was to keep active and exercise.

Despite being a little hard of hearing at 103, Stinson still stays active and walks daily in his house.

For his birthday meal there was cake, apple pie, collards, potato salad, baked ham and other southern delights.