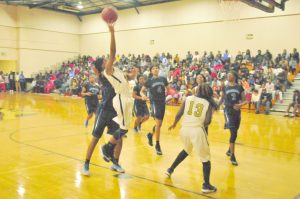 A lady Tiger shoots for two in their win over the lady Panthers of Georgiana. (Clay Branum | The Standard)

After an early release for Butler county schools on Friday due to snow and the subsequent thaw on Saturday, Greenville High hosted the Georgiana Panthers in a local basketball rivalry.

The Tiger’s Junior Varsity team played a close game with the Panthers JV with a final winning score of 55-47 Tigers. Couch Marcus stated that these young players did a great job. “They are all very talented and played hard.”

Deon Hawkins led the Tigers in points with 15 and Justice Palmer followed with 12.

Once the JV teams game was finished, it was the ladies teams turn to step on the court. Both sides played a hard game with the score always being within a handful of points of each other.

The third period showed an opportunity for the Panthers to tie the score but Greenville denied them that chance and outpaced them until the game ended 66-51 Greenville.

Adriana Taylor led the lady Tigers in points with 22 and Malisha Brown was close behind with 18 points.

Hoping to follow in the Tiger JV and lady Tigers footsteps, Greenville’s varsity players just couldn’t hold out for a win and they lost 87-76.

Roughly 20 turnovers and a few miscommunications led to the Tiger’s demise. “We got out played,” said Greenville head coach Marcus Mickles “They wanted it more and killed us on the board.”

The Tigers will play at home on Tuesday, Dec. 12, against Wetumpka.

Georgiana will travel for their next game on Tuesday, Dec. 12, visiting W.S. Neal.