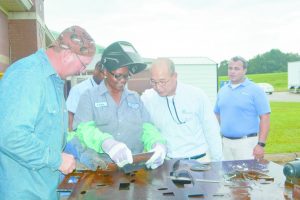 At the regularly scheduled meeting of the Greenville City Council on Dec. 11, 2017, Hwashin America Corporation announced their expansion plans for their Greenville facility.

During the next six months Hwashin will invest in excess of $23 million and create 100 new jobs. Hwashin located in Greenville in 2003. They are a tier one supplier to the Hyundai automotive facility in Montgomery.

Greenville Mayor Dexter McLendon stated, “We are excited about the new jobs and investment Hwashin has committed for Greenville. Great things happen when city and county governments and the business community work together toward a common goal.”

Terry Moseley, Chairman of the Butler County Commission for Economic Development (BCCED) commented, “Companies have a choice regarding where they locate and expand. We appreciate the confidence Hwashin has shown in Greenville and Butler County with this and other expansions over the past 13 years.”

Butler County Commission Chairman Allin Whittle also was in attendance at the Council meeting. He said, “We are delighted that Hwashin, by announcing their expansion plans, will continue to create jobs and wages that will in turn add new income to the Butler County Schools.”

Earlier in the year Key Safety Restraint Systems announced a $3 million expansion and the creation of 25 new jobs. With the Hwashin announcement on Monday evening the investment and job totals for 2017 are over $26 million and 125 new jobs, respectively.

BCCED Executive Director David Hutchison emphasized, “These successes are representative of the importance of our existing industrial base in Butler County. The BCCED, at the direction of the Board of Directors, is very focused on the retention and expansion of our existing industries. As a result, the unemployment rate in Butler County has decreased from 11.7 percent in January 2013 to 4.3 percent in September 2017.”