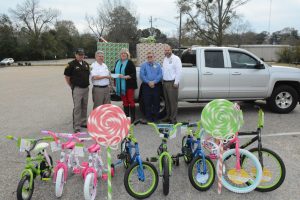 Kathy Smyth, Safe Harbor director, is pictured receiving a $10,000 check and toys worth $3,000 from The Sheriff’s Posse of Butler County Alabama president Charles Thomas. Also pictured are posse member Mike Stuckey on the left and Walmart Autocare manager and posse member Cliff Kirkwood and Walmart store manager David Luckett on the far right. Walmart donated $400 worth of bicycles through the Sheriff’s Posse. (Bruce Branum | The Standard

Tears flowed and then big smiles as Kathy Smyth, Safe Harbor director, received $11,000 worth of donations from Charles Thomas, The Sheriff’s Posse of Butler County Alabama president, this past Thursday, which included $400 in bicycles from Walmart.

After receiving the gift, Smyth said while wiping her tears, “It is really sweet. It is a Christmas miracle for a lot of kids. Thank you each and every one of you. I really appreciate that,” as she thanked Thomas and David Luckett, store manager of Walmart and other members of the Sheriff’s Posse.

Smyth expressed to the Sheriff’s Posse, when the toys were first delivered, about how she was talking to a grandmother of three children who had asked if they were doing a community Christmas and that she (Smyth) couldn’t say no, “The lord will provide… and then y’all drive up.”

Safe Harbor, otherwise known as Butler County Children’s Advocacy Center, is a non-profit organization and has helped many families through the years, not only with Christmas gifts for children but human resource services for those children who have been victimized or are suffering in different ways due to family circumstances.

According to Smyth, Safe Harbor helps families and especially children that come through the Department of Human Resources and other sources. They take donations and hold annual box lunch sales to help assist with funding of the organization.

According to Thomas, he collected the $3000 on one cold day by shaking a bucket in the middle of the road soliciting funds at the Holiday Inn Express on Willow Lane in Greenville.

Thomas expressed, that from the original formation, the Sheriff’s Posse’s purpose was to benefit the people of the State of Alabama by charitable, benevolent, educational, civic, scientific, cultural, and patriotic means.

Through those means, they help to promote social and civic affairs and assist with strengthening civic, health welfare of charitable and philanthropic organizations in the state of Alabama.

There are currently 23 members in the Sheriff’s Posse. At times in the Butler County’s history the Posse has been called upon to aid in man searches. Part of their incorporation document explains that they also can promote horsemanship.

Thomas also wished to thank the Dollar General stores at Short Street in Greenville, Pineapple Highway, Luverne Highway and Georgiana for their participation in toy collection. He added his thanks for Tractor Supply and Walmart’s participation in toys and funds collected.

Many of the Sheriff’s Posse members manned the charitable stands during a two weekend period at the first of December.

Danny Bond, a lieutenant with the Greenville Police Department, was also on scene to help with the unloading of presents. He volunteered his time for the gift unloading and said he was glad to see the Sheriff’s Posse reforming. He spoke of his association in years past with the organization and their charitable contributions to the Sheriff’s Boys and Girls Ranch and others.

Luckett, who was also evidently proud to be part of the moment, said, “We did some bike donations and let the Sheriff’s Posse set up in front of the store for a couple of weekends to collect toys.”

Also aiding to help with the delivery of such a special gift were Sheriff’s Posse members Mike Stuckey and Cliff Kirkwood, who is Walmart’s Auto Care manager.