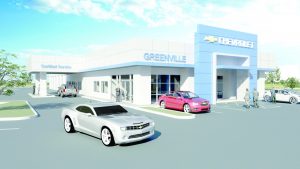 “In 1930, the dealership, known then as Fort Deposit Motor Company became a Chevrolet dealership.

When my grandfather passed away in the late 1970’s, my father, Charlie B. Haigler, Jr., took over the Company.

“Unfortunately, Fort Deposit is a small town that has enjoyed little growth over the last few decades. In 2000, my father relocated the dealership to the quickly growing Greenville, Alabama.

My father passed away in 2005, just as we completed an addition to the facility to create a larger showroom.

“Following the death of Ken Gibson in 2016, I became the Chevrolet Dealer Principal and changed the name of the dealership to “Greenville Chevrolet.”

“My goal now has been to expand the dealership’s sales and service effectiveness through the renovation of our existing building and a larger supply of new and used car inventory. To reach this goal, I have added two investors, Chapel Hill and Chris Avant, plus the best General Manager, Jake Aeschliman.

“Each has experience in the automobile business and we remain a family business.

“All of us at Greenville Chevrolet are looking forward to 2018 with the renovation of our entire facility and extremely large inventory. We are also entering the tire business with state-of-the-art equipment.

“I think my dad and grandfather would be very pleased with what we are accomplishing at Greenville Chevrolet.

The dealership has not had any renovations since 2000 and plans are to remodel the outside, show room and add additional lighting to the parking lot and paving.

In Haigler’s comments to council members, he was excited about the future of the car dealership and believes 2018 will be a great year for the company. 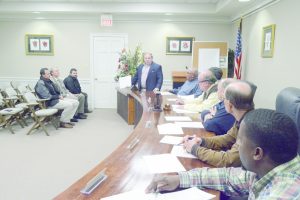 Charles Haigler speaks to the City of Greenville council members about the renovations Greenville Chevrolet will be undergoing over the next six months. (Bruce Branum | The Standard)

The council voted approval to give Greenville Chevrolet (HH&A Investments, LLC) a 10-year tax abatement for the company’s promotion of economic and commercial development, stimulation of the local economy, expansion and enhancement of Interstate 65 Exit 130 and enhancement of the quality of life for the citizens of the City of Greenville.