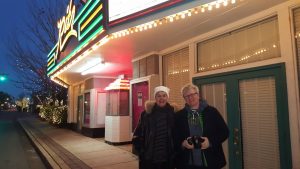 Nancy Idland is pictured with Louise McWhinnie who is from Sydney, Australia in front of the Ritz Theater in downtown Greenville. McWhinnie and her husband Chris are touring several southeastern states studying historic theaters. (Bruce Branum | The Standard)

Louise and Chris McWhinnie, who are from Sydney, Australia, recently visited Greenville this past Thursday evening to study and take pictures at the historic Ritz Theater.

She is the Dean of Faculty and Transdisciplinary Innovation at the University of Technology Sydney and both she and her husband Chris have a fondness for small towns due to their historic architecture and signage.

She specializes in typography, which is the design of letterforms. Over the last three decades Louise has lived and worked as a designer and academic in three continents (Australia, Europe and Asia), and in the last decade her research has been conducted within a fourth (America).

She said, “So what I’m doing is crossing the whole of America recording its earlier commercial typography, including bowling signs, diners, hotels, and early cinemas and anything between 20’ to 50’s; pre-interstate, when the roadside was commercial but not franchised.”

She and Chris have traveled to 47 states over an eight year period and found the Ritz Theater on the website www.cinematreasures.org.  Before stopping in Greenville, they also visited the historic Ga-Ana Theater in downtown Georgiana.

Louise said, “Every time I get a bit off from work, I come running over. We are doing four weeks at the moment and we are traveling six states, east Texas, Alabama, Arkansas, Louisiana, Mississippi and Tennessee.

Chris said, “It’s a joy for us to do it. I’m the tour guide, bus driver and help with location finder. We do a lot of research beforehand and when suddenly you come across something you never found on the internet and it’s an absolute joy.”

Both Louis and Chris expressed their genuine interest in the towns they visited and were concerned about the arts. They make sure to travel the old highways and visit the small towns that can tell its history. “The roadside of America is a living museum,” noted Louise.

Nancy Idland, Greenville Area Arts Council director, graciously came to the Ritz and turned on the lights for Louise to take pictures. She, Louise and Chris discussed the history of the Ritz from its origination, through the segregation years and of how it had changed over the last thirty years in venue and structure.

They also discussed the importance of art venues in communities and how they are such an integral part of the vibrancy of a community.