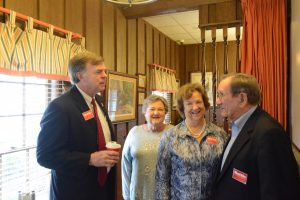 Huntsville Mayor Mayor Tommy Battle visited Bates House of Turkey in Greenville this past Wednesday to speak about his candidacy for
Governor. He is pictured with (L-R) Sandra Hickman and Merle and Pete Newton. (Bruce Branum | The Standard

On Wednesday, Jan. 10, Alabama gubernatorial candidate Tommy Battle visited Bates House of Turkey to speak with local area residents about his candidacy. He is originally from Birmingham and then moved to Huntsville some 30 years ago and is the current mayor of Huntsville. He is touring the state meeting with citizens to deliver his message on how he plans to change state government, improve infrastructure, create greater educational opportunities and bring more jobs into the state. Battle stated the biggest challenges he plans to tackle first are education and transportation. From those two things you have jobs he indicated. “Jobs give you money to attack other challenges,” he said and added, “The importance of jobs is the key, when our children and children’s children have opportunities to have a livelihood in the community they were raised and to give back, it strengthens those communities.” Battle is a family man and in 2018 will have been married to his wife Eula for 30 years. She is a former kindergarten teacher who is a 34 year veteran in the public school system and co-founder of Free 2 Teach, a non-profit organization that provides classroom resources to nearly 4,000 teachers. They have one son, Drew and his wife Lauren, and one two and a half year old grandson. “Making a difference is the most important thing. We keep looking at the state and the vision from the capitol does not live up to the potential this state has. If you want the same old politics we’ve had for 30 years, I’m probably not your candidate. If you’re looking for someone who will move forward and actually do something, I’d like your consideration. I will work with all parties to make the state a success.” said Battle. For more information visit www.tommybattle.com.