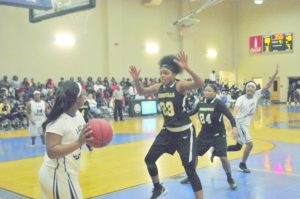 After another week of holidays and inclement weather the Butler County basketball season resumed this past season with the Greenville Tigers facing off against the Georgiana Panthers. The Tigers came out on top in all three games against Georgiana. The Junior varsity boys won 49-33, while the girl Tigers pounced on the Panthers 77-53 and the Varsity boys won 78-71.

Leading the Junior Varsity Tigers in points was Erik Rudolph with 12 points and Dawson Sarblah with 15. Standing out for the Lady Tigers with 24 points was Moeshia Brown. Close behind her with 20 points was Adrienna Taylor followed by Jovela Ocean with 13 points.

The stars for the Varsity Tiger boys team were Jerimiah Owens scoring 21 points and recovering 17 rebounds, Remontez Rhodes with 12 points and Jedakis Henderson with 11 points.

Greenville Head coach Marcus Mickles stated, “You could definitely tell we all had several days off with no practice, but towards the end things started coming back together.

“This coming week will be a busy one for the Tigers,” said Mickles. “With four games in six days, hopefully we will be back in the groove of things.”

The Greenville Tigers will host Charles Henderson of Troy this Friday. Games begin at 3 p.m.