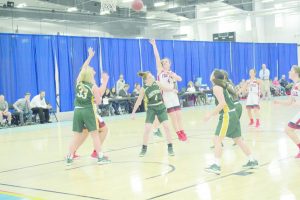 Eagles. Starting in the Elite 8 this past Thursday the Eagles squared up against the Edgewood Academy Wildcats and secured their advancement into the Final 4 winning 53-44. Three of the Lady Eagles stood out in the game against Edgewood. Junior Anna-Blake Langford scored 25 points, Senior Bailey Coker scored 14 points and Senior Lucy Bates scored 11 points. After earning entry into the next round on Thursday against Edgewood, the Eagles returned to Montgomery on Saturday to play the Tuscaloosa Academy Knights in the Final 4 of the play-offs, which eventually ended in the Eagles defeat 42-28. Leading the Lady Eagles once again were Langford, Coker and Bates. Langford had 11 points, Coker had five points and Bates  had four points.