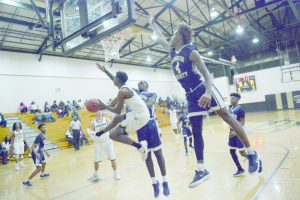 This past week was the end of the regular basketball season for the Greenville High School Tigers teams. At the start of the week the varsity girls and boys faced off against the Monroe County Tigers. The girls won 67-39 while the boys lost 70-60. Shining for the Greenville girls with 22 points was Moeshia Brown followed closely by Adrienna Taylor with 19 points of her own. For the varsity boys Romontez Rhodes led the team with 18 points tailed by Tyrone Ingram with 11 points. After the girls win and the boys defeat against Monroe, the Tigers traveled to Wetumpka for their next game against the Indians. The girls won 53-28 while the boys lost a close one, 60-59. Brown led the girls again with 16 points and Taylor had 13 points. Playing a close game against the Indians, the boys’ top players were Rhodes with 18 points and Chris Martin with 15 points. The last game of the regular season for Greenville was a home game against the Calhoun Tigers. All three games came down to the end for both schools with neck and neck scores. The JV boys won 39-35 as did likewise the girls with a victory, 59-51. The varsity boys took the game to final seconds but suffered  a nail biting loss 55-54. Erik Rudolph and Justice Palmer led the JV boys with 10 points each. Once again leading the girls in points were Brown with 22 points and Taylor with 18 points. For the boys, Jeremiah Owens led the Tigers in the end with 16 points and Martin had 15 points. The Greenville High Tigers honored their senior players and  cheerleaders during the evening’s games.