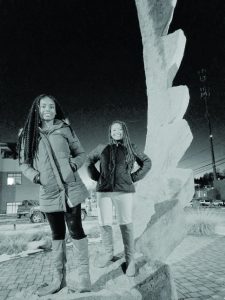 Butler County School Superintendent Dr. John Strycker’s wife, Debra, made the effort to take the two students to North Carolina after talking with them about their career choices.

Debra has been actively involved in student affairs, bathrooms and also career tech in the Butler County schools. She worked in interior design with Broyhill, which is an $800 million company and when she talked with Tangela Posey at Georgiana School, Debra found out Tangela’s interest in interior design and decided to take Tangela and Tianna to North Carolina after receiving permission from the school and their parents.

Debra explained it was a great tour, “The girls got to tour Appalachian State, see snow, the mountains and also tour Valdeez Weavers, which is a fabric manufacturing company near Charlotte, N.C.” At Valdeez the two students got to see the weaving process from start to finish.

They left Greenville on Tuesday, Jan. 16 and returned on Saturday, Jan. 20. As part of their tour, they also visited the Biltmore Estate.

Debra said that the girls found it fascinating that Mrs. Vanderbilt had allowed precious artworks to be stored at the Biltmore during World War II after it was recognized that Germany was confiscating artwork for their own purposes.

Tianna Whittle said, “It really opened my eyes to college opportunities. Appalachian State offered a lot of financial aid to “out of state” students and they were really welcoming. It was an honor for me to go and that Mrs. Strycker chose me and Tangela. It has encouraged me to study abroad and helped me start thinking about questions for my future in college.

Tangela Posey said of her experience, “It was amazing. I got to learn about interior design and when I go to college I have a better understanding of what to look for on college campuses and the studies they focus on.”

Tangela also added, “Thank you to Mrs. Strycker for me being allowed the fantastic opportunity and teaching me about my life choices.”

Debra does not intend to stop her involvement with schools. She already has plans to involve the welding class of Career Academy and take them on a field trip to North Carolina.

She hopes they will find the same encouragement as Tianna and Tangela. “I want them to see all the things they can create beyond a straight line. We hope to come back and the students will begin to create their own pieces of artwork,” said Debra.

“Hopefully in May, after we get back, we will have a sculptural festival where the students can display their artwork,” added Debra.