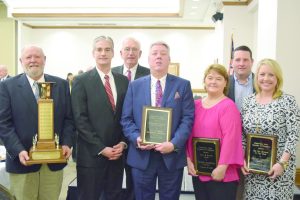 Those in attendance were happily reminded why the Camellia City is such a great place to live: its people!

The first award of the night was the New Business of the Year distinction, which was presented to Johnson Furniture.

While Johnson Furniture opened its doors in the downtown area in July 2015, the award may be presented to any business that has opened in Greenville in the past three years. Owners Brian and Ashley Keith were on hand to accept the award.

Next, JoAnn Mathews was presented with the Above & Beyond Award, which recognizes an area resident who has worked tirelessly to make Greenville a better place. Matthews, who works as a coordinator for Southerncare Hospice, volunteers with several area programs including Terrific Kids and the Achiever Award. She also dresses up as Mrs. Claus to surprise older citizens and children during Christmas.

Distinguished Business of the Year Award was presented to L.V. Stabler Memorial Hospital.

Citizen of the Year Award was presented to Greenville native Charles Newton. Newton, who graduated from Greenville High School, served as representative for Butler County in the House of Representatives from 1988-2015.

The final award of the night was the John D. Murphy Award, which is given to an individual who has helped the county grow and prosper. The award was presented to Milton Luckie, who has worked for the City of Greenville for 38 years.

“Any time I have ever called Milton to do something,” said Mayor Dexter McLendon, who presented the distinguished award, “he has always said ‘I’ll get it done,’ and he did.”

In addition to the awards, the large audience was regaled with stories of Alabama’s colorful political past by political analyst Steve Flowers, who served in Alabama’s House of Representatives for many years.

Mayor McLendon concluded the night’s events with a recap of the 2017 year for the Camellia City and a look ahead to what he hopes will be an even better year in 2018.