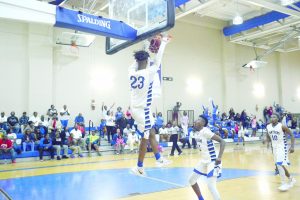 Panther Martavius Payton dunks for the final two points of the game against Marengo. (Bruce Branum | The Standard|

After an easy area tournament last week, up until playing the Brantley Bulldogs in the final game, the Panthers ultimately pulled through to secure their seat in the next division of playoffs for this season of basketball.

Once the Panthers won their area division it was on to the south regional to play against Marengo. After a defeat in the finals this past football season it was the turn of the Georgiana Panthers boys’ varsity team to take revenge on the basketball courts, 72-59. JaMichael Stallworth led the Panthers in points with 22 while Christian Williams sank 13 points and Christopher Mixon scored 10.

Once their win over Marengo was finished, they moved on to play Houston County for the next round of the south regional playoffs and won 88-75.

Going into the first quarter Houston County pulled a big lead on the Panthers 17 to 8. But, coming into the second quarter the Panthers let it be known that they would not go without a fight.

After the first half the Panthers closed the gap and started to make Houston County sweat. By the fourth quarter it was clear Georgiana was the better conditioned team and they won 88-75.

With their win against Houston County the Georgiana Panthers boys will continue on the road of the playoffs to play Linden on the Feb. 20 at the Legacy Arena in Birmingham at 5:45 p.m. Their record stands at 28-3 for the season.

The Panther girls lost to Linden 53-35in their region tournament and finished the season with a record of 16-14.

Both Greenville High School varsity boy and girl basketball teams lost in their region tournaments. The boys lost to Wilcox Central 54-52 and the girls lost to Jackson 35-33. The boys’ season record was 10-14 while the girls’ record was 6-13.