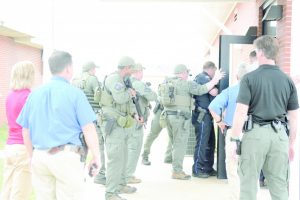 GPD SWAT Team members and FDA Headmaster David Brantley are about to discuss the lock down exercise. (Bruce Branum | The Standard) 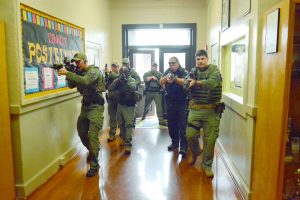 The Greenville Police Department SWAT Team is pictured entering McKenzie School as if they were called to a live shooter event. (Bruce Branum | The Standard)

McKenzie School had a full lock down exercise complete with the Greenville Police Department (GPD) Swat team performing a room by room search and student evacuation.

FDA only practiced a lock down but the GPD SWAT Team investigated the entire premises and familiarized themselves with the grounds in case of an actual incident.

Butler County Sheriff Kenny Harden said they have a collaborative agreement with the GPD SWAT Team to respond to all county school emergencies.

Greenville Police Chief Justin Lovvorn said the exercises give the team firsthand knowledge of the layout of the campus’s and also problem areas which cannot be readily discerned from blue prints.

Georgiana Police Chief Carlton Cook indicated Georgiana School would be hosting a mock drill in the near future.