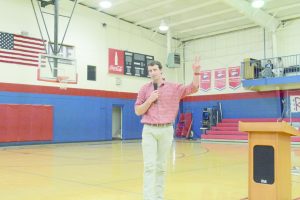 Former University of Alabama quarterback Brodie Croyle was invited to Fort Dale Academy on Wednesday, March 1 to speak to students.

He started his speech that life is about interpretation. He added, “A measure of a man’s success is not in what he acquires but how he affects those around him in a positive way.

We all get so caught up in the little things but it is the daily investment you make in yourself to prepare for the big moments and how you respond to those moments.”

Croyle relayed a heart breaking story about how when he was five years old and standing with his father at the Big Oak Ranch when a truck pulled up and a man dropped off three young boys because his girlfriend said to make a decision about keeping the children or her. The man left his three children at Big Oak Ranch. One of the boys became Croyle’s best friend in life.

Croyle now helps the Boys and Girls Ranches in Alabama.