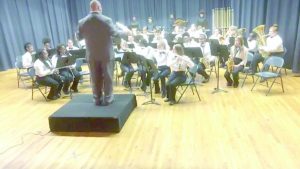 The Greenville High School (GHS) and Greenville Middle School (GMS) symphonic bands performed at Music Performance Assessment (MPA) on March 13 at Enterprise High School. GHS Band Director Brett Johnson said both bands’ performances were ones for the books. “This year was a very historical year from both the middle school and the high school,” said Johnson. “Both of the bands received the highest scores that have ever been received in their schools’ histories.” Johnson said the high school band received their highest scores with a very special circumstance because they performed music at the highest difficulty level available. “The high school band has never performed music at this level until this year,” said Johnson. “We started preparing the music in January after Christmas break. “I knew going into it as a director that it was going to be a challenge, but the kids rose to the challenge and definitely exceeded my expectations.” Johnson said he had high hopes for the GHS band all along. “Going into the performance, I knew that we had the potential for something special to happen,” said Johnson. “After the performance was complete, I knew that we had performed a marvelous job and had a great chance for something wonderful to happen with our scores.” Johnson was not the only one who was happy with the results. “When I told the kids our score, they were ecstatic,” said Johnson. “Straight superior ratings on stage!” Johnson also praised the GMS band’s results. Johnson said the GMS band has performed brilliantly all year along, and that is thanks to the excellent leadership they have under director Chris Pryor. He also said it means the GHS band has a bright future ahead. “After hearing the middle school results,” stated Johnson, “I became even more excited knowing that the program is growing. We’re going to be in good shape in a couple of years when the middle school kids become high school students.”